The Hearts have a long story.

I have been making hearts ever since I met Marianne.  The "Marianne's Heart" became the logo for our business back in the '80s. 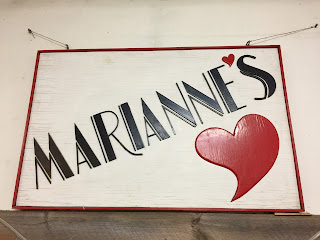 I have been making small hearts whenever I have left over plaster or cement.  Except for the red one all the hearts below were made while I was working on the large Swinging Jenny for New York City. 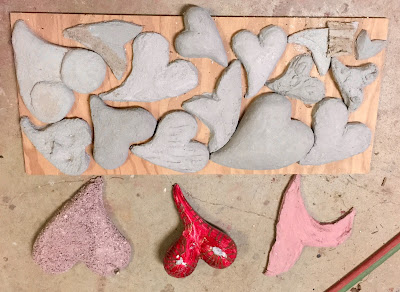 The big Hearts came from cleaning up the mess along the border with our neighbors.  Years of growth had hidden a lot of junk that had ended up on our side. 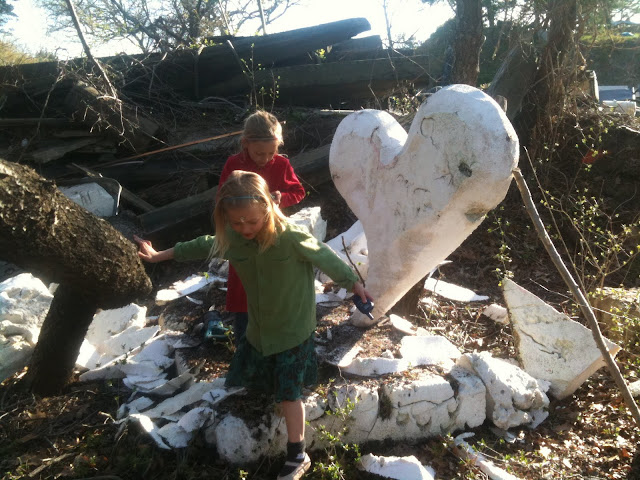 This was taken six years ago when I started carving the Heart out of junk foam that we found half buried.   Why not try to make something beautiful out of dealing with junk?  Saves having to take it to the dump. 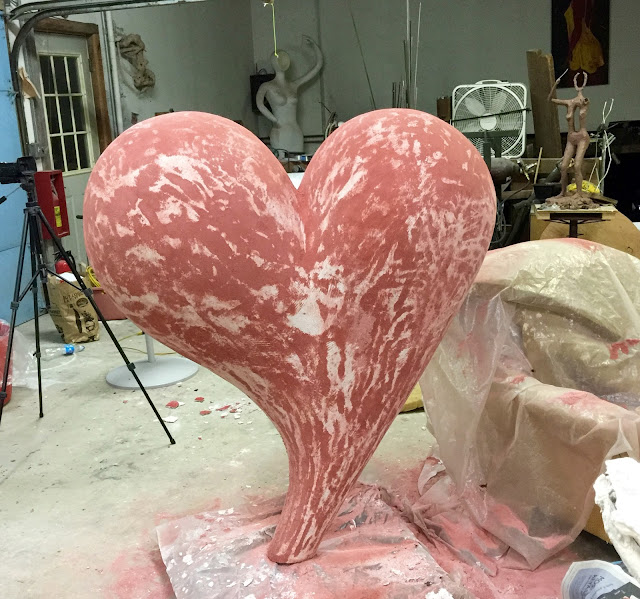 In my studio I refined the shape of the foam and then covered it with several layers of Silpro, a special type of cement that contains fiberglass for added strength.  I color the layers so when I rasp the heart I can easily see the high and low spots.  I put a steel tube up the center of it so that I can mount it on a vertical smaller diameter pipe.  Here the pipe is mounted on the plywood base.  Outdoors the pipe is in the ground.   A nice thing about this is that the Heart can rotate  so you can see it from different angles.. 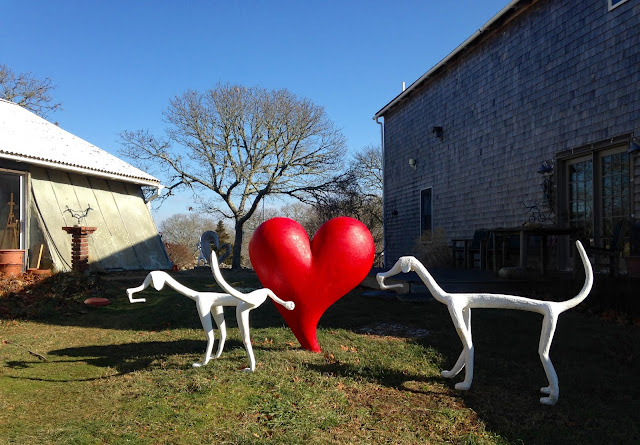 Painted a nice bright red  and put outdoors it certainly attracts the eye.  It also seems to have attracted the attention of some of my Dogs.

The Tumbling Heart is hollow and was made using the Standing Heart as a mold.  I made it in four sections using Silpro about 1/4" thick.  Then when I put the pieces together I put a metal tube inside and metal reinforcing.

I showed the Hearts at the Family Planning Art Show at the New Ag Hall in West Tisbury in 2015. 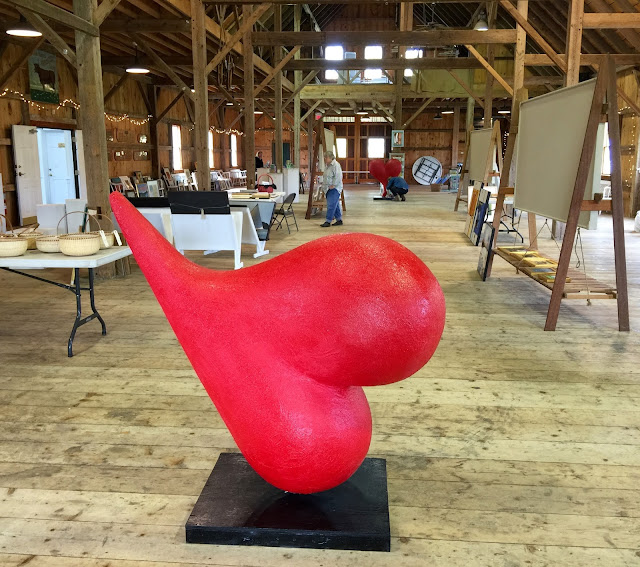 This was taken two years ago.  The Twins have gotten a lot bigger.  Here they are celebrating Zack and Jac's wedding.


Five years later after a big late night party down the road by my houseI discovered the Heart was missing.  Then it was found abandoned and broken by the side of the road.


It turned out that one of the party goers leaving the party had taken a Snap Chat Video of the taking of the Heart so we were able to discover who had stolen it.
Naturally I was very upset and angry and wanted punishment and revenge.  But when I thought about it I realized how negative that would be, not just for the young man who had done something stupid while drunk, but also for me.  I was in the middle of working on the large Swinging Jenny for New York.  It is a sculpture about joy and the bond between generations.  I couldn't afford to waste my time being angry and negative.  I also couldn't help but remember that I had been young once and had done stupid things when I got drunk.
I talked to the young man.  He felt bad about what he had done, though not bad enough to admit it until he was caught.  I had him come back to my place and help take the broken Heart to my studio where I could repair it (at his expense).  He also helped install the Tumbling Heart in the place of Heart he had taken.  We talked and maybe he learned something.  He is a nice young man, at least when he is not drunk, and I liked him.  Later in the fall he helped me move the bronze The Dance from the Field Gallery for it's trip to Summit, NJ.  As far as I know he has stayed out of trouble since.

It seems like I got some good karma out of the whole episode.   When I started repairing the Heart I got a call from the Field Gallery.  They had sold the Jump Rope Girl steel sculpture.


So I took my repaired heart to the Field Gallery were it could be with my cast bronze Dance and painted steel pipe Swinging Jenny.  My daughter Jennifer Christy's abstract paintings are hung on the wall facing the Swinging Jenny. 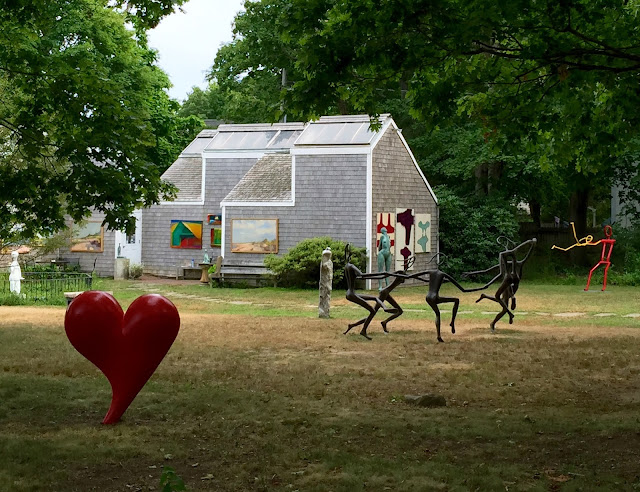 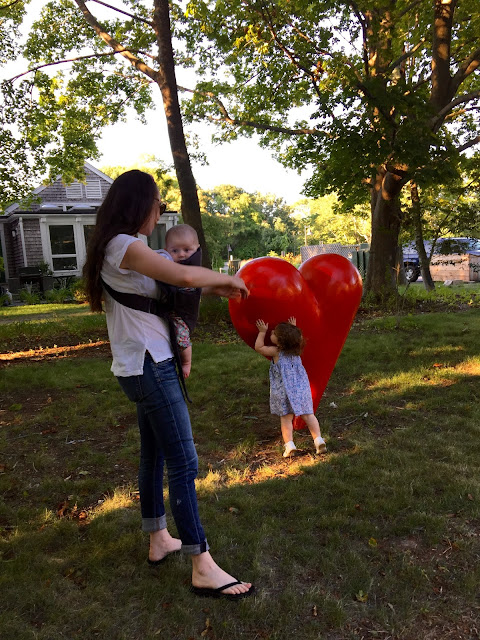 Here is a short video of installing the Heart.