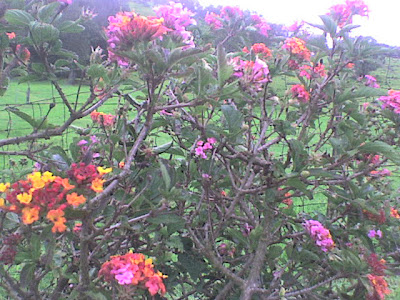 What a beautiful day it has been so far. It has been cloudy and rainy for several days now, but last night the almost full moon was off and on visible through the breaking clouds. The rain and wind direction has cleared out of lot of the vog from the volcano so I could see all the was to South Point.

As I was finishing up my morning cup of green tea I saw some fins breaking the surface way out in the bay. I put on my bathing suit, picked up some choice leaves that had fall during the night, grabbed my mask, fins and snorkle and headed out to join them. They were slowly cruising around. One group had three subgroups of two, five, and eights dolphins. There was also another smaller group that was less interested in swimming near me. The third time they came close enough to me one to see them underwater (the visibility is about 40-50 feet) I swam parallel to the group so as not to disturb them. One of the adolescents came over by me so I pulled a leaf out of my shorts and dove down and put the leaf suspended about 10 feet down. The dolphin swam back around and caught the leaf on his flipper. We swam around for a while then he took off to join the others. I was getting pretty cold by then, so headed in toward the beach. On the way in the dolphins came by me one more time, then the took off and headed north along the coast.

On Sunday I had a fine ride with some of the mountain bikers I met at the Mountain bike clinics put on by Bike Works Kona. Kilua Kona and then drove in light rain to Puu He'ewai, a large cinder cone on the way to Waimea. It was a 2000 foot climb to the top. I didn't have the usual excuse of being the oldest guy, since Fred, a local doctor and one of the origian big island mountain bikers, is a couple of months older than me. Talk about being in great shape and a fine rider, he gives me hope that in a couple of months I'll be charging up those hills. As for now, they were nice enough to wait for me and not make me feel bad about it. 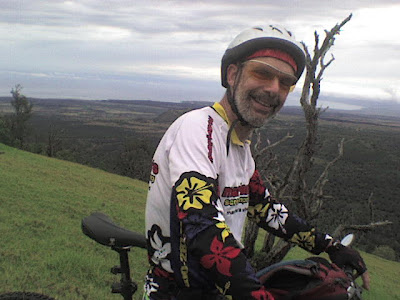 The rain stopped and it cleared out a bit when we got to the top. The views were amazing. I don't think my cell phone pics will do the justice, but here are some photos from the ride.
photo 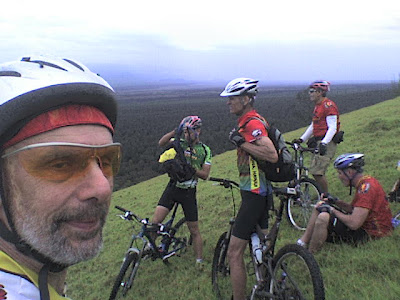 We had a short break for a power bar, but we were almost 4000 feet high and the wind on our sweat and rain soaked bodies was too cold so we took off down the steep sides of the cindercone. Once again I was the slowest. This time out of caution. 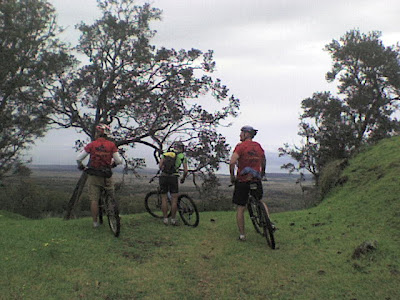 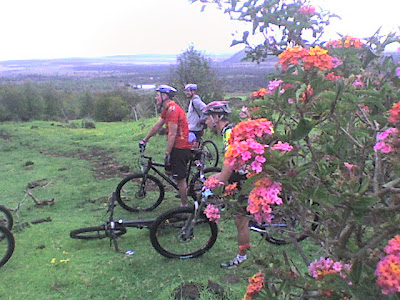 Farther down the cider cone the views were still fine. Lower down we entered into a forest. And as usual Hawaii always has some beautiful flowers growing just about anywere. 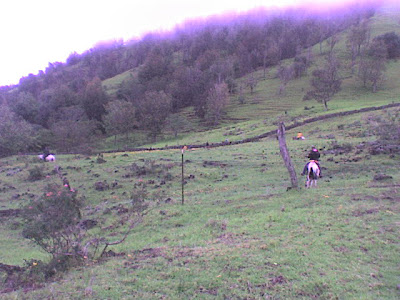 A little later we came across a group of horseback riders. That looked like a good way to explore the place, and without having to petal so hard. But of course I do love the excercise.


After we finished the ride and started driving back to Kilua Kona it started to rain hard and gave no indication of letting up, so I went to the movies and saw "Watchmen".