An albatross quite possibly saved my life.  It was 1972, and I was on a Hinckley 48' yawl sailing from Spain to South Africa.  We were about 5 days west of  Cape Town on the edge of the Roaring 40's.  The wind had started picking up the previous afternoon and by evening the waves were over 30' high and around midnight a steering cable stretched and broke.  I was woken up to help fix it.  By the time we were able to fix it, it was 2 a.m. and time to go on watch.
By dawn the wind had increased to hurricane force gusts and we were surfing down waves 50' high.  Those of you who know Hinckleys know the 48’ is a fell keel cruiser and it not designed for surfing.  But with those waves and the strength of the wind we were.   It was hard enough to steer the boat but we also had to try to keep track of the wind.  The wind speed would go over 70mph in some of the gusts and then when we were deep in a trough between waves is might drop below 20 because of the way the wind was swirling around between the waves.   Just after dawn  either I steered too much downwind or a wind shift caught us.  In any case the boat jibed and when I was able to straighten out the boat, the wind caught the storm sail jib and snapped it back so hard that I was afraid the mast or rigging might break.   It turned out that half of the hanks holding it to the forestay broke.
Scared of jibing again I started steering us on more of a broad reach.  This seemed to be working until the crest of one of the bigger waves started to break and when that mass of water hit the side of the boat and knocked the it over onto its side.   The mast was horizontal and the deck vertical with water flooding over the  right hand side of the ship.  Fortunately the hatches were closed and we had on safety lines.  If you think I was scared before at that point you were right, but now it started to feel like we actually were going to die.
I asked Carsten, my watch-mate,  to take over the helm.  I felt I was failing and I was also totally exhausted from not having any sleep that night and fighting the storm.
Carsten refused, said he couldn’t do it.
That's when the albatross came to us.  In the howling wind and huge waves, the albatross was calm and controlled as he glided toward us.   He circled our boat and flew back the way he had come and was gone.  Then he came back,  with his wingtip  seeming to skim the crest of the waves.  The he circled the boat three times and I could feel the tension and panic slip away.   The albatross was one with the storm.  He wasn’t fighting it, he seemed to be enjoying it and using it to help power him in his flight.
Time seemed to slow down. I let myself feel the boat and sail interacting with the waves and the wind.  The boat seemed to be steering itself all I had to do was to work with it, not fight it.   Everything was going to be alright.
Within a half an hour the the wind slowly started to decrease and our watch would finally be over.   Turned out I had to stay at the helm an extra half hour because the Captain decided it was more important that he try to get a RDF or LORAN bearing from Capetown even though it couldn’t make any difference since we were still days away and well out of radio range.


This piece has a lot of different names.  When Obama started coming to the Vineyard in 2009 I created it in I created it in a white cement over  foam and a steel rebar armature.  Everyone called it the "Obama Sculpture" because they could see that it was the Obama family with their dog Bo. 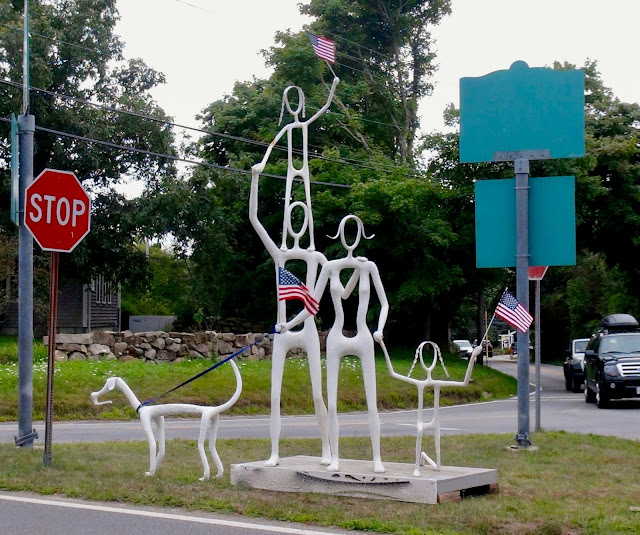 But to me this sculpture was my family back when Chris and Jenny were still young.  It was originally made in 1998 for Bill Clinton's visit to the Island in painted flat stock steel.   It was inspired by the way families would wait by the roadside to see the Clinton entourage pass by in their fleet of black SUVs with motorcycle cops leading the way.   In 1998 Chris and Jenny were 29 and way to big to stand on my shoulders, but I could imagine it.   Because of Viet Nam I have had a problem with waving the American flag, but I decided it was time the "good side" took back the flag.   And in 2009 I was feeling proud of America for electing a black man as President. 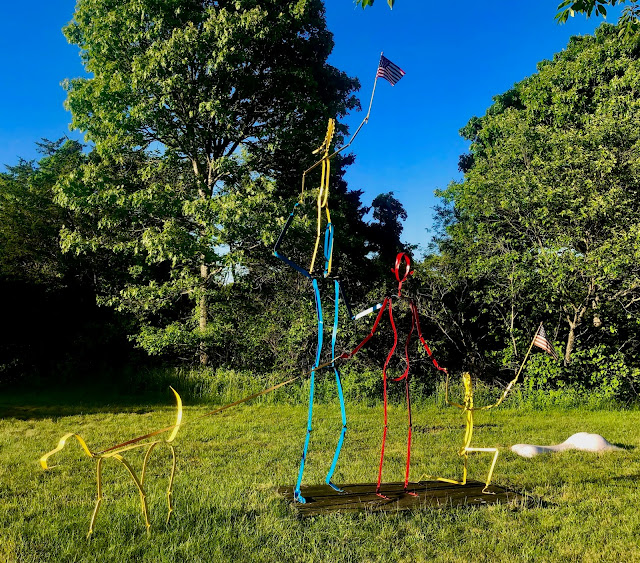 When everyone though the sculpture was the Obama family even though I had created it thinking of my family I finally realized that what I had created was an American Family.   That turns out to be  one of the main strengths of my "minimalist abstract figurative style".   The figures are not any particular people, they have no ethnicity or class,   It is up to the viewer to put into the figures whatever they want to see or feel.  As Degas said, "Art is not what you see, it is what you make others see."

This is one of the reasons I wanted to have this piece made in the mirror finish stainless steel.  That way when people come up to it and look closely at the sculpture they will literally see themselves and their family in it. 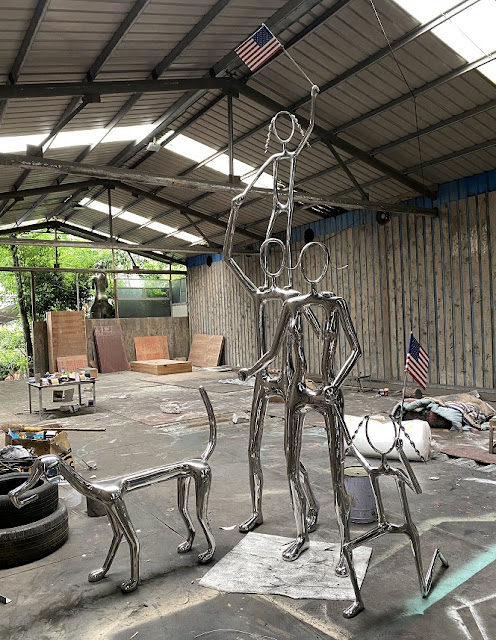