Art is not what you see, it is what you make others see, degas

Great quote along with

Art is what you can get away with. 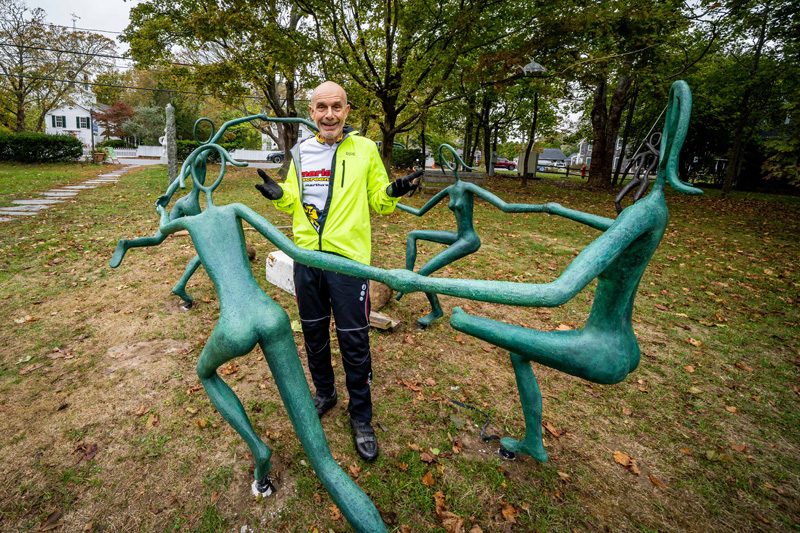 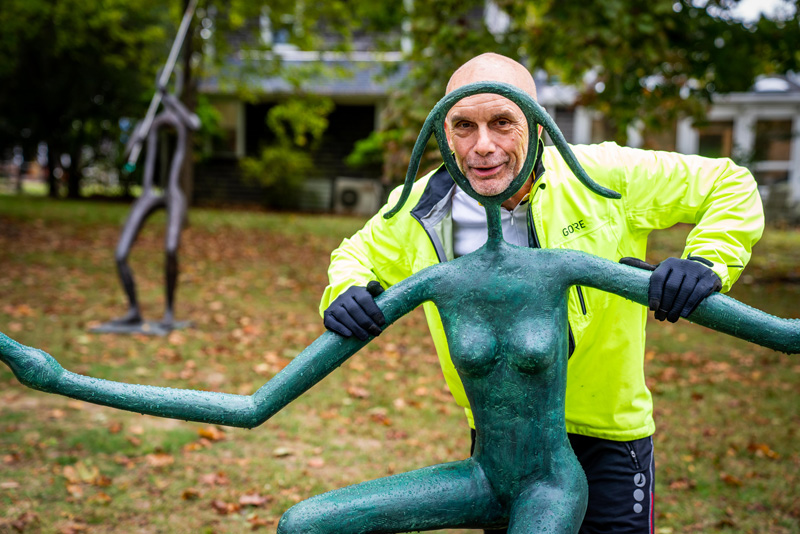 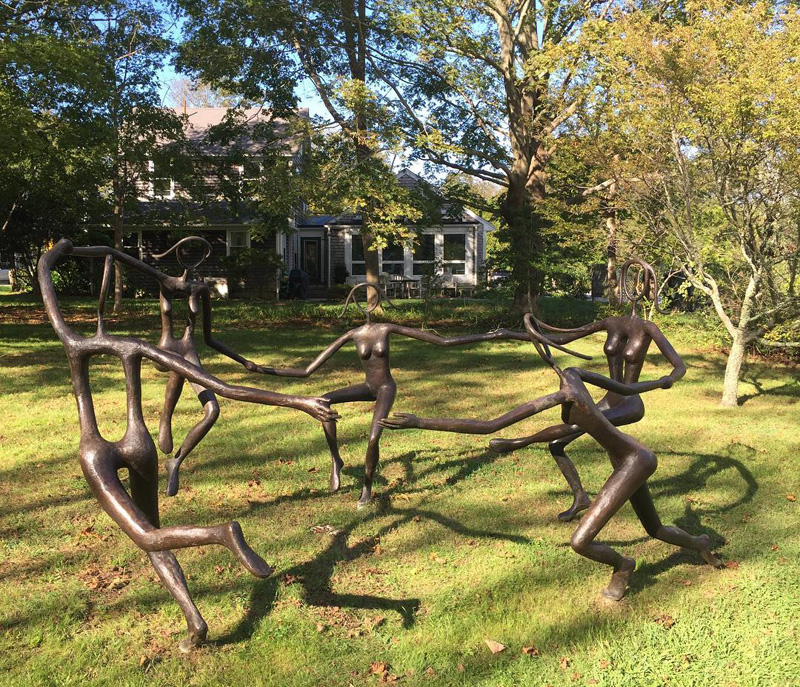 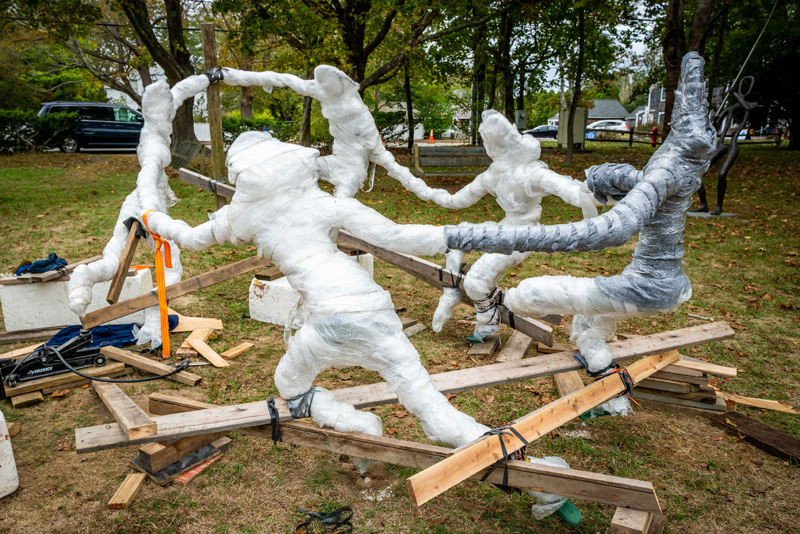 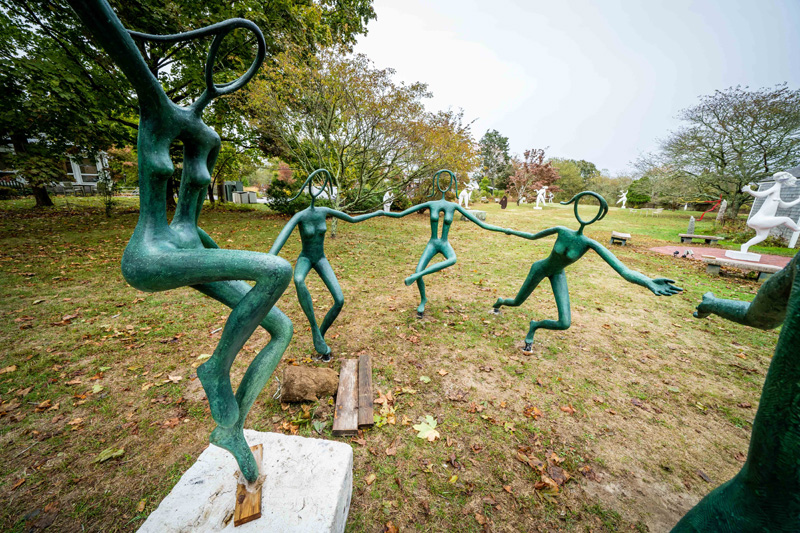 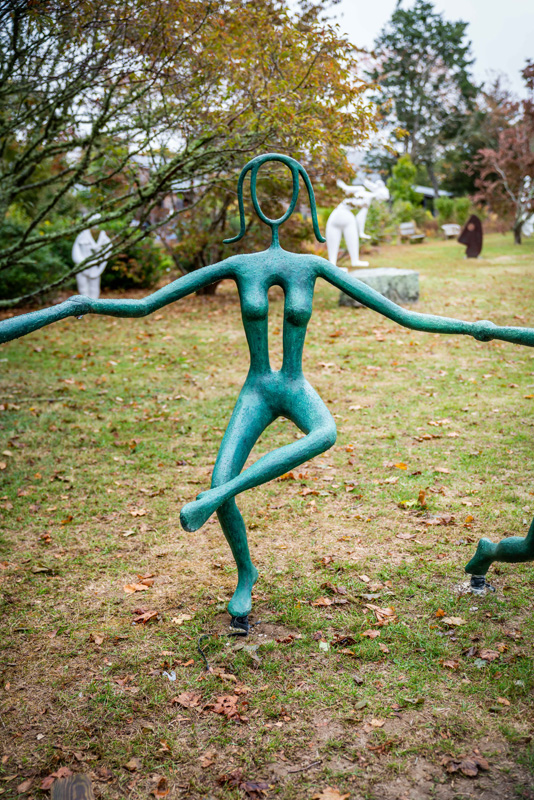 The Field Gallery in West Tisbury is recognizable for its Tom Maley sculptures of fanciful, exuberant, dancing women, but the first thing you see upon entering the yard is not a Maley, it’s a sculpture called “The Dance,” five women with their hands joined, dancing ecstatically in a circle. The sculpture is by Jay Lagemann. who is perhaps best known for his sculpture “The Swordfish Harpooner,” which was commissioned for the town of Chilmark’s tricentennial and has presided over Menemsha Harbor for 26 years.

You may also be aware of his sculpture titled “Backwards and in High Heels” a tango-dancing couple with the woman wearing red high heels, which was created two years ago for Women’s History Month, held at Featherstone Center for the Arts.

But back to “The Dance.” As you enter the Field Gallery now, you may notice something has changed. “The Dance,” which for six years has been a rich, dark brown shade — Rodin brown, it’s called — now is jade green, verdigris to be precise. What happened to the dancing girls? A side effect of the pandemic, perhaps? No, the girls are perfectly healthy, but to understand this shade shift, perhaps it would be instructive to go back to the beginning.

As I talked to Lagemann at the Field Gallery, he was wearing a blue ball cap and a white Swordfish Harpooner T shirt, and his eyes twinkled above his pale blue mask as he took me through the origins of “The Dance.”

“I originally did a small version of ‘The Dance’ in 2001 when I was on the beach in Thailand, recovering from a herniated disk,” Lagemann said. “I associate this piece with rejuvenation and getting well. It was a wonderful feeling, after being down and then coming back up.”

Lagemann always planned on doing a full-size version of “The Dance” at some point, but then life caught up with him. In 2007 he was diagnosed with prostate cancer; he was operated on in 2008, but by that time the cancer had already spread, so Lagemann decided to take a step back and reflect on the nature of life.

He went to Hawaii, camped on the beach, swam with dolphins, rode his mountain bike, and got strong again, and looking back, he realized that he’d had a great life. He had gone to Princeton, and did graduate studies in mathematics at MIT; he’d been a sailor, an author, an artist; and was lucky to be living in Chilmark on a compound with his loving wife and his grandchildren living next door.

Life had been good to Lagemann, and in time he recuperated. Then in 2011 he created a life-size version of “The Dance” constructed out of Silpro, a form of concrete applied over rebar and foam. And originally “The Dance” was a deep shade of red.

An old childhood friend of Lagemann’s, Jonathan Schiller, saw the sculpture in Lagemann’s studio and loved it, and wanted one for himself, so the two worked out a plan. Schiller would put up the money, and Lagemann would have another cast, this time out of bronze. Lagemann went to a foundry in Lancaster, Pa., and oversaw the casting, and the result was “The Dance,” but now in a deep brown bronze color.

Schiller wanted “The Dance” for a house he was building on the Island, but the house wasn’t completed yet, so the sculpture instead went to the Field Gallery, where it was then seen by Jim Symonds, who wanted it for his summer house on Long Island. Curiously, Symonds had gone to MIT undergraduate school and did his graduate studies in mathematics at Princeton, the reciprocal of Lagemann. Also, perhaps due to the popularity at the time of Jeff Koons, an internationally acclaimed sculptor who had done work in stainless steel, Symonds and Lagemann agreed to cast “The Dance” in stainless steel rather than bronze. The original bronze piece was sent to a foundry in Thailand, where Lagemann would oversee the casting, and three stainless copies of “The Dance” were cast. Schiller so much liked the new stainless steel “Dance” that he elected to take a stainless steel version for his new house, rather than the original bronze. And a family in Bethesda, Md., decided to take the third stainless steel copy.

So if you’re keeping score, that now leaves the original red Silpro sculpture that was used (and later destroyed) to make the bronze reproduction, which was then used to make the three stainless steel copies, but here’s where it gets a little tricky.

Just prior to the pandemic, Lagemann wanted to have another stainless steel copy made, but he wanted to have it formulated — a process that would allow him to assemble the sculpture out of highly polished sheets of stainless steel, resulting in an almost mirror-like finish. And for this he went to a foundry in China. Except he didn’t physically go to China, because of the pandemic, so he shipped the original bronze sculpture to the foundry so they could use it to make a mold.

The result was sensational. The new fabricated version is now in Lagemann’s home sculpture garden, and “it’s so reflective and shiny I could almost use it to shave,” Lagemann said.

But getting back to the jade green sculpture that now greets you as you enter the Field Gallery — well, that’s actually the original bronze sculpture that has stood at the gallery for years. While it was at the foundry in China to create a mold for the fabricated version, Lagemann had them change the color to green.

“I like the color,” Lagemann said, “I like the way it stands out.” Perhaps not as much as a shining stainless steel surface that is so reflective you can shave with it. But stand out it does, in its own quiet way. 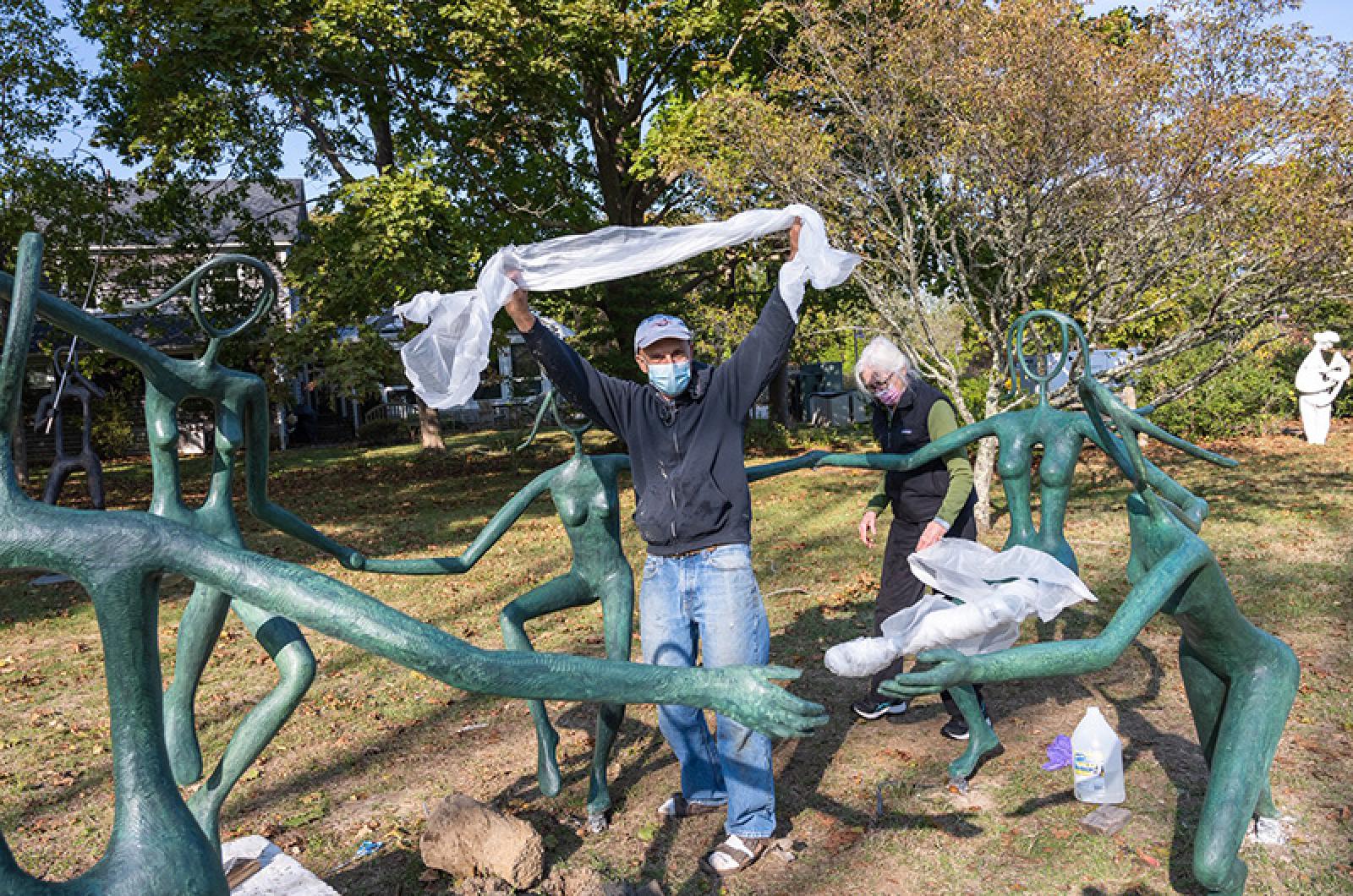 Dancing Again at the Field Gallery

For anyone who has strolled past the lawns of the Field Gallery in West Tisbury in recent months there has been a statue-shaped void where Jay Lagemann’s The Dance normally rests. The piece — a bronze-cast sculpture of five Matisse-like dancers — has been on an extended journey to a foundry in China since early last December.

But on Sunday, after nine months overseas, the iconic metal dancers finally made their way home, returning to the Field Gallery with a new jade green finish.

The trip abroad was prompted by the recent sale of three stainless steel copies of the statue, Mr. Lagemann told the Gazette by phone on Monday. Looking to duplicate the statue for the new buyers and hoping to try a slightly new style, Mr. Lagemann shipped The Dance to the Tany Foundry near Shanghai, where it was replicated using a special fabrication process, new to Mr. Lagemann.

“You can cast stainless steel but it’s very hard to get the polish,” Mr. Lagemann said. “They use the original as a model and then take sheets of stainless steel and they bend them and warp them, and then weld them up.” 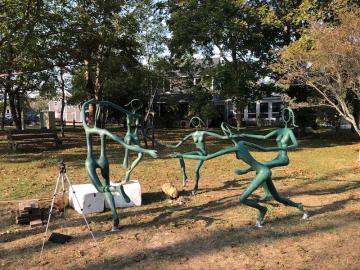 Popular sculpture is accustomed to round the world journeys. — Jay Lagemann

The result is a copy with the same wiry playfulness as the original, but this one, Mr. Lagemann explained, has a gleaming mirror-like finish. “It looks sort of like a Jeff Koons.”

Mr. Lagemann, who began sculpting in 1975, is best known for his distinctive metal sculptures — vibrant creations that can be seen on Island roads, like the Swordfish Harpooner statue at Menemsha Harbor, and big city streets, like the Swinging Jenny statue in midtown New York.

The Dance, one of Mr. Lagemann’s best known works, has had a home at the Field Gallery since 2014, when Mr. Lagemann shifted his plans to install the piece at a friend’s home and gave the statue to the gallery instead.

In its many years on display, the life-sized bronze statue has also traveled far and wide — from Lancaster, Pa., where the original statue was cast, to Easton Md., where it was showcased at a museum show in 2014, and to Summit, N.J., where it was displayed as part of the Summit Public Art Program in 2015. Before the most recent trip to China, the mold had even traveled as far as Thailand to be cast and copied at a local foundry there.

“This is a sculpture that likes to travel,” Mr. Lagemann said with a laugh. “It’s all over the place.”

Mr. Lagemann said he is also showcasing one of the new steel copies in his personal sculpture garden, Wild Island Sculpture. “This is the first time I’ve had one of these dances at my sculpture garden and I feel great having it.”

In addition to The Dance, Mr. Lagemann also sent his Family Sculpture — familiarly known as the Obama sculpture for its prominent display during the Obamas’ presidential visits to the Island — to China to undergo the same fabrication process. The new stainless steel Family Sculpture is also on display at his home, but Mr. Lagemann said he hopes to show it publicly on the Island in the future.

“I love it personally. I came here as a six year old with my family — this is a family place,” said Mr. Lagemann. “I think it’s a great sort of symbol of what the Vineyard is all about and...it would be fun to see where people think it should be.”

As for The Dance, after a long trip to China and a multi-month shipping delay due to the pandemic, Mr. Lagemann is glad to finally have the sculpture back in its home at the Field Gallery.

“It’s funny, I made them for my family and that’s, I think, why they’re full of happiness and joy,” he said. “It’s wonderful that other people feel it — that’s the most important thing in a way, is that my sculpture, makes people happy. That’s what gives me joy.”