Finally back home. The trip back was a bit stressful because my changed flights didn't get me back to Boston in time to get the last bus to the Ferry to Martha's Vineyard. A very nice ticket agent at the Kona Airport managed to get me on a different flight that went through Dallas/Fort Worth and got to Boston a little after 6PM. That was too late for the bus and didn't leave much time to catch the 8:30PM boat. Using the web I was finally able to get Falmouth Taxi to pick me up. We made the boat with 10 minutes to spare.

It is great to be home and see Marianne again after being away for almost three months.

I got an interesting email today:

Hello Jay,
I stumbled upon your Wild Island site purely by chance and your swordfish sculpture(s) caught my eye. If I ever make it down to Martha's Vineyard my first order of the day will be to locate the Menemsha site and photograph your work of art. But my reason for contacting you today is to share a bit of information I found while researching my Acadian ancestry. My great-grandmother, Mary Boucher (a/k/a Bouchie) who was my mother's mother's mother - direct matrilineal descent - emigrated from Isle Madame, a small island just off the southern coast of Cape Breton Island in Nova Scotia, Canada, to Everett,
Massachusetts where in 1884 she married a fellow Isle Madame native by the
name of William Sampson (my gr-grandfather). They were of French Canadian Acadian origin whose ancestors had been expelled by the British in the latter half of the 18th C. Of the resulting diaspora that spread across the American colonies, England, France and the Caribbean among other places, some returned to Cape Breton when that became possible after a period of 10 or 20 years around 1790 or so. They were a mix of farmers and fishermen who, a couple of generations later (mid to late 19th C), were drawn to Massachusetts by the promise of steady income from work at the mills and factories And many came down. either temporarily or settling permanently, as fishermen in places
like Gloucester, Boston, New Bedford, etc. My gr-grandfather William Sampson chose factory work and with Mary Boucher raised their family in Everett, Ma where he worked for what eventually became Monsanto Chemical. But Mary's brother, Isadore Boucher, settled with his wife in Gloucester, MA where he worked as a fisherman. At the turn of the century this would entail shipping out on a wooden fishing schooner and in the case of swordfishing would also mean rowing out from the mother ship by dory to retrieve the harpooned fish. The danger and hardship of this occupation is well known into modern times. In the case of Mary's brother Isadore, tragedy struck in the year 1902 when he drowned at sea while directly involved in hauling in a large swordfish.
So when I saw your sculpture, the incident involving my ancestor immediately
came to mind and I thought you might have an interest in hearing about it. I've
attached two images. One is of the news item that was published in the
Cape Ann newspaper at the time. The other is a close-in shot of his name
as it appears on one of the several bronze plaques that comprise the Gloucester
Cenotaph and fishermen's memorial on the Gloucester waterfront - also the site
of the famous Gloucester fisherman statue. I hope you enjoy seeing these. If you ever find it useful to reproduce these images for any lawful purpose feel free to do so without restriction. I would merely request the courtesy of a minimal note of attribution for the cenotaph image.
Best Regards,
Tim Nolan
North Andover, MA 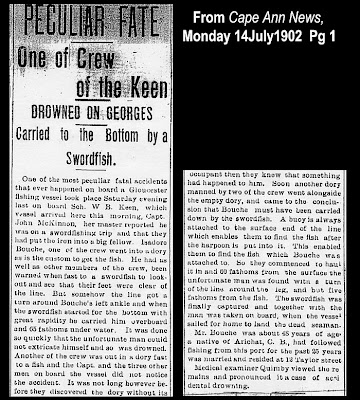 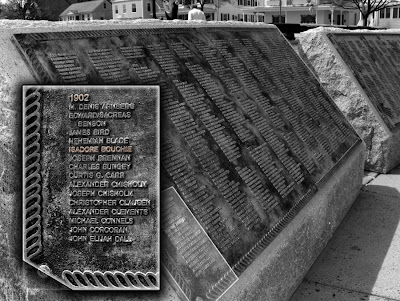 Email ThisBlogThis!Share to TwitterShare to FacebookShare to Pinterest
Labels: Finally Back Home on Martha's Vineyard 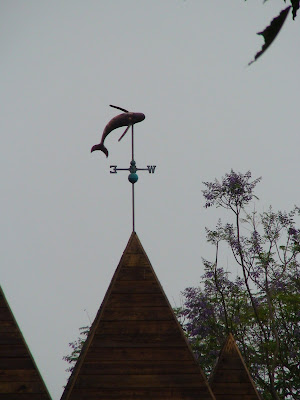 It is a bit hard for me to believe, but I did it: the weather vane is finished and installed and three days before the Higashihara Park reopens.

I have been so focused on making the piece and then installing it that I haven't taken any time to tell the story of my progress here in the blog. But I did take a bunch of video so hopefully I will take the time in the future to go back and fill it out.
Posted by Jay at 3:00 PM No comments: