Reminiscing about Sharks, Jaws and Jaws 2

Great list-- but there is one of your top movies that I will never see.

Here is the reason why.

(Sadly I did not realize Jay and Nick would be there or I would have visited- of course they might not have invited me.)

My date and I threw down an anchor. Then we sat in the cockpit and drank a bottle of wine and smoked two cigarettes of a type of weed that is now legal in a number of states.

When we were sufficiently stoned, we decided to row ashore for dinner.

I had a small, somewhat tippy, fiberglass dinghy.

While I was rowing the short distance from the anchor to the dock, my date suddenly let out the most piercing shriek I have ever heard- "Shark!!!!! Shark!!!! Shark!!!!!

She jumped and as she did, the dinghy capsized.

As I was falling in the water I looked in the direction she was pointing and saw a HUGE shark. I could not only see the fin-- I could see the entire shark. It's Jaws were opening and closing. It looked pretty hungry-- and we were swimming.

Sharks are pretty scary on their own, but you really do not want to encounter them when you are drunk and stoned.

My date was flailing around. She was screaming and choking on the water at the same time.

The shark seemed to be coming closer. I thought my date was going to drown. I tried to grab her, but she literally punched me.

Suddenly a boat pulled up -- and grabbed my date from the water, She was still screaming hysterically.
Then, they pulled me out.

The shark was right behind the boat. It actually seemed to be coming closer.

As they pulled me out, I could hear the men on the boat trying to comfort my date. "Don't be worried about the shark. We are making a movie. That is not a real shark. It is mechanical model. We were just taking it for a trial run."

It took a while for this thought to sink in.

The shark's jaws were still opening and closing. Then, someone pushed a button and the shark stopped moving.

My date kept screaming. It took a while to calm her down.


Jaws may have been a great movie- but having actually experienced this shark in the water close up, I decided if I am going to see a movie about fish, I'll stick with Finding Nemo-- or maybe Little Mermaid.


Jay:    I did work my way into Special Effects, but only because I was a sailor and they needed help with crashing the sailboats.  Not being union I wasn't allowed to touch the shark.  After finishing the last crash and putting together the "raft" I was no longer essential so I was kicked out of Special Effects and sent back to the boat department.  They even told me that I was no longer allowed to do any work on the "raft" (made up of  crashed sailboats) which I had built.  For the last month or more my job was reduced to putting up one sail in the morning, playing backgammon for money all day and then taking down that one sail when it was a wrap.
I stayed on after shooting was done to help with the cleanup (and score a lot of goodies that they were leaving behind).  One morning after getting stoned on the ride out to the set (it was the '70s after all) the second unit AD, a real asshole, ordered me to wade out in the water and take apart the raft that I had build, but then was no longer allowed to touch.  It was also January and pretty cold even on the Gulf Coast near Pensacola.  I told that AD that I wasn't allowed to touch that raft.  He told me he was ordering me to do it.  I told him I couldn't because of the union.  He said the union wasn't there but he was and just do it.  I said no.  He said, "you're fired!"  and I was sent back to headquarters in a limo.
When we got there I told the manager that I didn't think that he really wanted to go through with that asshole AD's firing of me.  Not only would it mean that I wouldn't be able to collect Unemployment insurance when I got back to the Vineyard, which wasn't his concern, but more importantly I would go straight to the union and tell them how I was fired for standing up for the union and refusing to do union work which I had very explicitly and emphatically told that I, not yet being a union member, was not allowed to do.
So for the next two or three weeks until the breakdown was finished I was still employed and collected my paychecks even though I didn't have to go to work.  I was allow to use their equipment and materials to weld together a trailer which we filled up with goodies.  I'm still using some of those bolts.


Jay:       It totally changed our lives.   That where Marianne started screen printing T shirts.  A little know historical fact is that JAWS 2 was the first Hollywood movie to have more than one T shirt for the cast and crew during production.  After we got her on the set printing the one boring JAWS2 design she started coming up with designs and Ts for each of the departments.  The Camera crew got a shark with a camera, the Dive Crew a shark with an Aqualung, the Teamsters an 18 wheeler Shark talking on his CB Radio....
Not only did we build up a stockpile of cash by my working 70-80 hours a week (plus 6 months of Unemployment Insurance - since no other movies needed work on Martha's Vineyard) and Marianne selling T shirts on the set but that's where I learned a lot of my sculpture skills and perhaps more importantly the concept of making "Special Effects".  By definition a special effect is something not normal and that may have never been done before so there is no shame in not getting it right the first time, the second time, etc.  You just keep working at it and learning from what goes wrong until you get it to work once, and from one camera angle and then, since nobody ever sees all the failures and mistakes people think you must be pretty smart and talented.
After Jaws 2 was finished in Florida it was the middle of January and Martha's Vineyard was pretty cold and dark so we hitched my newly build trailer with a ton of stuff to the 12 year old Volvo that I had bought for $100 and headed out to LA, our heads full of Hollywood Dreams.  Not only did we have a lot of connections, but also, because I had worked in Special Effects and had the paystubs to prove it I could get right into the Union without the usual wait of up to 2 years.
But the old Volvo didn't really like pulling that heavy trailer and broke down when we got to Tucson, Arizona where my mother had grown up.  During the two weeks it took to get it fixed we had bought  more skateboards so we could all keep up with Chris and Jenny, who were 8 at the time and had also decided we needed a break from work.  So when we started driving we dropped the trailer off at a storage place and took a left turn and headed into Mexico for 4 1/2 months.  By the time we left Mexico it was Spring and we were all ready to go back to Martha's Vineyard where we started Marianne's Screen Printing.  The rest, as they say is history.

PS  I wonder how the strange twists of fate, or maybe just smoking some weed, has changed the course of other classmates lives.  I'm sure there are a lot of good stories out there.

This is the original Reading dog.  His surface is Silpro, a special cement,  over foam and a steel armature.  A few years ago I chopped him up into seven pieces which I stuffed into a suitcase and and we flew to Thailand and I had him cloned.

Then I stuffed him back in the suitcase and flew home.  After I put him back together he was back in my sculpture garden, but he likes to travel so he hitched a ride down to the Academy Art Museum.  While their he convinced a nice couple to adopt one of his clones. 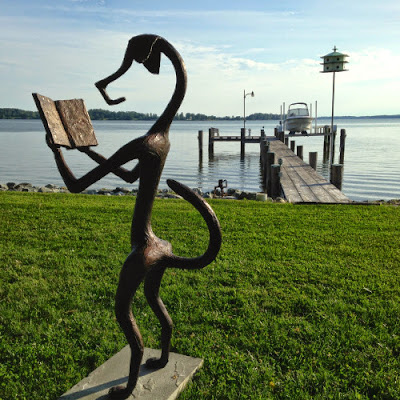 The bronze Reading Dog #1 at his new home.

The bronze Reading Dog #2 met his new owners while hanging out at the Field Gallery in West Tisbury.  Now he is hanging out on the north shore of Long Island.

There is also a stainless steel Reading Dog #1.   After hanging around in my sculpture garden for a year he took a trip to spend the summer at the Peabody Essex Library in Danvers, MA. 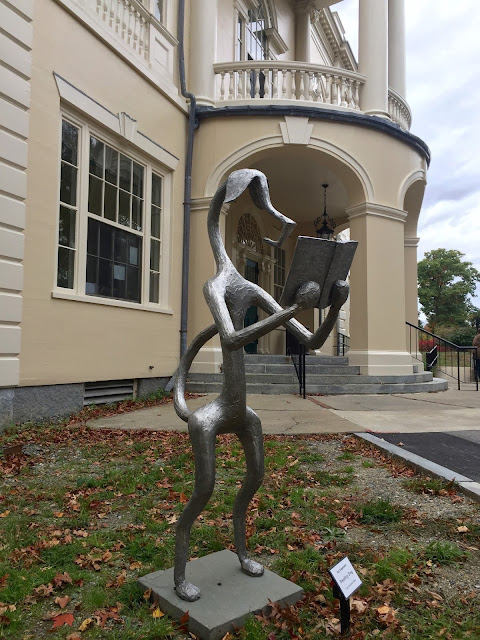 He is a very friendly Dog.  Pretty soon he made so many friends, especially with the kids using the wonderful Children's Reading room.  So they decided they would like to adopt him.  Now it is just a question of raising some money.  I've offered to help, of course.  I love it when my dogs find a great new home.

Looks like I'll have to go back to Thailand this winter and bring back some more Dogs.  The Dogs are a limited edition of 12 bronze and 12 stainless, with a couple of APs for the artist and his family.