It was a bit strange waking up before dawn so I could watch the Superbowl.  Yes, that's right, the kickoff was at 6:30AM here in Bangkok.  I walked over to The Sportsman Bar and was very lucky to get a nice comfortable seat at the bar.  They had been selling reservations for the seats, but the owner of mine was a no show. 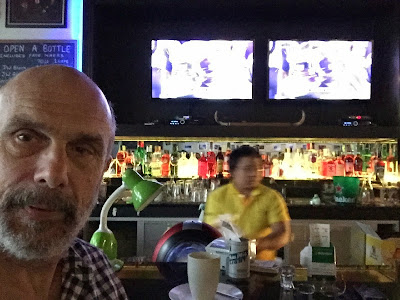 Somehow I couldn't see starting to drink beer at 6:30 in the mornings so I ended up drinking coffee and having breakfast.  What a game!  Wow! and with all the ups and downs, lead changes and interceptions we WON!  Hard to believe Seattle with 2nd down on the 1 yard line wouldn't just hand the ball to Marshawn Lynch who had been powering right through the Patriots all day, but who cares, we won.

Now I'm in a cab on my way to the foundry to put in a half day's work.  I'm feeling pretty tired, but at least I'm pretty much over the jet lag from flying half way around the world.  It has been a busy time so far.  Besides working at the TMC Foundry a couple of days I have had two dental appointments: one to fix a chipped tooth and get my teeth cleaned, and the second to make the molds for the crown that goes on my dental implant.

At the foundry they are making the molds for my Peeing Dog.  I'm getting better at chopping up my original models and packing them up as luggage for the trip to the Foundry.  This time there was no damage.  It worked to first wrap the fragile ends in bubble wrap and then cover that with a layer of plaster soaked burlap (pieces of Todd's coffee bags).  That way the plaster shell can absorb any damage without the piece being hurt.  Turns out we should have done something like that with Jen's wax pieces because both of them broke into several pieces from all the pounding that the luggage goes through.  It didn't really matter, however since all the breaks were where Jen had put large solid pieces together with just a little wax around the outside edge.  So everything fit right back together and the Wax Ladies had no trouble making it as good as new.  They did have to put some supports in to keep everything in position because in The Thai heat the wax, which was almost rock hard in Jen's unheated studio, was pretty soft.  I just got the quote on the cost of casting these pieces so now we can go ahead and make the molds off them. 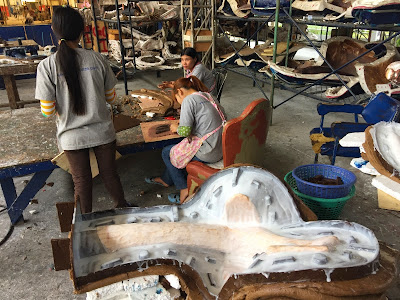 In the photo above you can see the Peeing Dog's head from underneath.  The white stuff is the latex rubber inner part of the mold.  It catches all the detail, down to fingerprints.  Great stuff that Michaelangelo and Rodin never had. 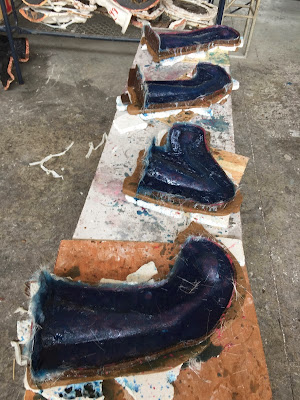 Above you can see the fiberglass "Mother" mold that holds the flexible latex rubber inner mold in place.  Those are the four legs of the Peeing Dog. 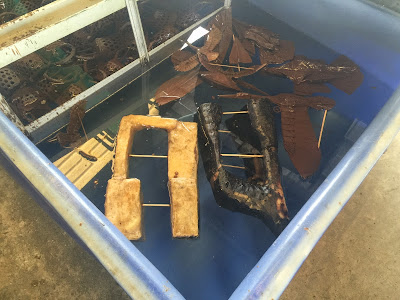 Those are Jen's two wax pieces "taking a bath".  It being so hot over here the wax is soft and can sag and loose it's shape.  The water both cools them down, making them harder, and "floats" them so the have no weight to cause them to sag.

I had a nice lunch with a new friend.  I have no idea what it is called.  I just pointed at what someone else was having and asked to have it with pork rather than the chicken feet like in his bowl. 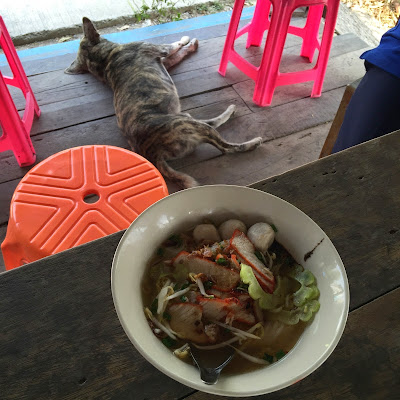 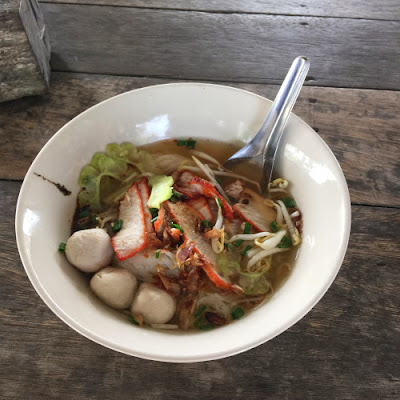 Later, heading back to the hotel.

I was feeling pretty tired and beat after the Superbowl but I revived and even though I only put in a half day at the foundry I had a good day.  First we solved a problem with one of Jen's wax pieces.  Because of the heat and the way it was constructed there was a sag that we had to fix.  Hopefully they will start making the molds tomorrow.  For now there is no longer the problem of sagging because they are now floating in water.  That helps in two ways; first the water is cooler than the air so it cools down and hardens the wax, secondly they are floating so they basically don't have any weight to cause them to sag.

The molds for the Peeing Dog are coming along.  They have finished the first half molds on some and the rest are close behind.

On Friday I went over the stainless steel Dance and marked all the problems I found with a magic marker.  Since we have already solved the problems you can easily see, almost all the things I marked I found by feel, running my hands over the piece like I am giving it a massage.   While I was in Bangkok going to the dentist to get the mold made for my implant (molds, molds, everywhere!) they fixed most of those.  So today I gave The Dance another massage to find those places where it don't feel quite right and could use a little building up or grinding down.  I also went over the stainless Swinging Jenny and the Hi Five Dogs.  The Dogs have my troweled on texture which looks like it would be difficult to recreate where the separately cast parts are welded together.  But they are cast in bronze which is a lot easier to work with and the the foundry is used to doing difficult things in bronze.  Bronze is also malleable  and a lot easier to work.  They seem to have a lot more trouble working the the rasped texture that i have on The Dance.  In the future I think I'll just go with smooth.  They can easily make the waxes smooth and it a lot easier to not have to worry about texture.  Or I could go with my troweled on texture if I want texture.  Now that I think about it the foundry had no problem with the troweled on texture of the stainless steel Reading Dog so the problem is really just with the rasped texture.

Karn had a big meeting at 3pm so I left a little early at 3:40 and we have had a very fast ride back.  Usually we are stuck in rush hour traffic, but today I've completely missed it.  Spending the ride writing also makes the time fly.  Time for a beer down by the pool.  Yesterday I was almost feeling depressed, but today with the Patriots winning and a good day at the foundry life is very good.